See the correlation between these customs and the rapture. 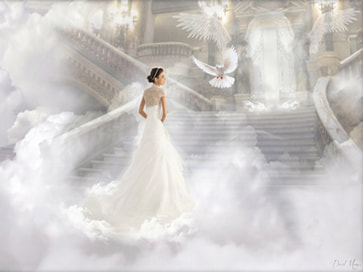 Did you know, that there is a distinct correlation, between ancient Jewish wedding customs and practices, to the Coming of the Lord? There will even be a Marriage Supper of the Lamb in heaven which is similar to ancient custom also. Please read through these verses and commentary and watch the beautiful correlation unfold. If you are already aware of it, there still might be an avenue or two that you might find enlightening.

Selection Of The Bride - In ancient times, the Hebrew father of the groom would choose the son's bride. The son would honor his father's choice and the arrangement plans would begin.

Jesus has made it very clear, that we did not choose Him, but we were chosen.


The Agreement/The Ketubah - The wedding agreement was called a ketubah. After the terms of the ketubah were accepted, a cup of wine was shared to seal the marriage covenant. From that time forth, the couple was considered to be married, even though the marriage was not consummated yet. The bride resided with her family until the time of the wedding. One especially interesting part of the ketubah was that the groom committed to complete provision for the bride from that time forth as the couple began their covenant relationship.

Consider the ketubah and when Jesus instituted Communion.

Notice how Jesus has said to honor the New Covenant, Communion, in remembrance of Him. He is the groom that had to return to heaven to prepare a place for us. One day, He will return for His bride and bring us unto Himself.


When we take the Communion Cup, we are remembering Him, the price He paid with His body and His blood; this is symbolic of the first cup of the ketubah. We should also stop, pause and rejoice in that: The next time the Lord takes the cup of wine again, it will be with us, His bride. This will be symbolic of the second cup of the ketubah. We should take Communion in honor of Him as He has asked, but also with the comfort and intent of someday, being with and sharing the wedding cup with Him at the Marriage Supper of the Lamb.

Bridal Consent/Commitment - The bride did have the choice of refusal. If she disagreed with what was being presented to her, she could refuse the wine cup and the deal was off. If she drank from the cup of wine, the covenant was sealed. The only way out of it after this for either of them, would be death or divorce. The engagement made them as legally married, but without sexual union.

When we choose to accept the offer of the Lord, as Lord and Savior, we enter into a covenant relationship.  We are betrothed to the Lord spiritually and we reject all other gods and idols and stay faithful to Him. We are like the bride of those days, in that we have all the legal rights of being betrothed, even though the marriage is not complete until the final ceremony.

The Bride Price/The Mohar - It was considered that the husband and his family were gaining an asset and the bride's family were losing one. And the price was according to the wealth of the groom's father. The choice of whom the bride would be and the "bride price" or "mohar" as it was called, was to reflect the father of the groom's honor, integrity and stature; His future generations were at stake. Even if the bride's family was not wealthy, if the groom's father was, the price was to reflect his wealth. Considering the stature and wealth of the heavenly Father, what would be a fitting price for the bride of Christ, the church?


Having been bought with a price, the bride now keeps herself for him. We, as the bride of Christ, were paid for with the most expensive bride price ever. Our groom, Jesus Christ, gave all He had for us, even His life with His body and blood.

While Betrothed/Preparations For The Future - The groom then began to build the new home, usually on family property, for the couple. It was important that this new home would meet the honor of the father's stature as it would be the home used in the continuation of his family. Neither bride nor groom knew when the Father would say it was “good enough,” so they both needed to be ready.

Jesus left to prepare a place for His bride, the church.


The Mikvah - When they felt they were getting close, the bride would go through the ritual of immersion, called a mikvah. It signified the passing of the old and the forthcoming of the new. The person has to be strictly clean and be completely immersed. Mikvah is the same word as baptism (immersion). Pictured below are an ancient mikvah bath and a modern one.

The Call For The Wedding - When the father decided that all was in order, he would have his servants start putting together the things needed. He would have the shofars blown, and send the word out that the wedding was about to happen. It was customary for one of the groom's party to go ahead of the (bride)-groom, leading the way to the bride's house - and shout - "Behold, the bridegroom comes." And the father would say to his son, "Go and get your bride!" This would usually happen at night, and when the bride got the word, she would run to meet the groom and together they would head for the ceremony.


The Huppah/Ceremony/Celebration - There would be a short ceremony, and then the bride and groom retired to the place he had prepared (huppah/chuppah/wedding chamber), and the friend of the groom, the best man, stood by the door. When the marriage had been consummated, the groom would shout in his joy and the friend of the groom would relay the good news to the guests. This was the beginning of a week long celebration and the first week of the couple being alone together in the bridal chamber.


The Ceremonial Second Cup Of Wine/The Simcha - This 2nd cup of wine was shared during the marriage ceremony with the bride drinking after the groom, thus the ketubah has been completed (the first cup of wine having been drank at the acceptance of the ketubah).


The Marriage Supper - Following the ceremonial proceedings of the huppah, is the marriage banquet, also sometimes called the wedding feast or marriage festival. This was the joyful celebration of the union of the couple with all their family and friends. For us as Christians, after the rapture, we have a very important banquet to look forward to with our Lord and King. All the church, the bride of Christ, will join the Lord at the Wedding Supper of the Lamb for this incredible special celebration. The Lord will take the long awaited cup of wine and we will all share it together with Him and enjoy the heavenly festivities He has planned.


The Bridegroom is Coming!

Many followers of the pre tribulation view, try to say that these correlations prove a pre tribulation rapture, which is not true. When two events, people or subjects are a "type and shadow" of each other as in the case of the rapture and ancient Jewish wedding customs, it does not mean they are perfect twins. Both Moses and Joseph are each credited to be a "type and shadow of Jesus" by most biblical scholars. This does not mean everything about them or their lives are completely the same as Jesus or His life. It simply means there are strong similarities. Such is the case of ancient Jewish wedding customs and the similarities shared with the rapture. It is interesting to note, that Jewish wedding customs evolved over time, just as in most cultures. Today, while some of the facets found in this article are similar, they have evolved also. Today, most weddings by practicing Jews, only have one wedding banquet and it immediately follows the wedding ceremony which is often done in synagogues and other places under a huppah (4 poles holding a sheet of fabric or talit as a covering). The bridal chamber (originally called the huppah) where the marriage was consummated and the announcement of the consummation to the wedding party, is pretty much a thing of the past. Today, the temporary ceremonial huppah represents the bridal chamber and home of the future.

As for the pre tribulation wedding view of "a heavenly week long wedding event," meaning everyone is in heaven for 7 years at a marriage banquet, as I have heard many pre tribulationists declare or suggest. To me, first of all, it seems like a wishful stretch to try to make the rapture happen at the beginning of the seven years. Secondly, nothing is written in the Bible about the Lord and His bride having week long (seven years equaling seven days) marriage banquet, or a marriage event starting with a banquet, then a week long (one day = a year) honeymoon followed by another banquet. The Bible shows that there is only one wedding supper of the Lamb and it is followed by the battle at Armageddon and the Second Coming (Revelation 19:6-21, 20:1-6).


Consider again the parable of: The Ten "Betrothed" Virgins


As betrothed brides, they were supposed to be preparing for their wedding, sewing the various garments, purifying, learning, etc in anticipation of the big day... all 10 grew drowsy and were sleeping.

They were to keep a light in the window during all nighttime and to have enough oil on hand to make the journey to meet the groom.

Without a light in the night, how would they find their way to meet the groom? They would stumble and fall, get off the path, being unable to navigate in the dark.

They were to “meet up” with the groom and head for the wedding ceremony, honeymoon and marriage supper.

Five of the betrothed made it, five did not.... all ten had the opportunity.

Though all ten did grow drowsy and slept, five had their heart in it and kept to their purpose. These stayed on course with well supplied lamps, trimmed wicks and fresh oil on hand. This is how we must be as the betrothed church waiting for our groom, Christ Jesus.  Only the “prepared ones” will make it. There will not be any second chances. Those arriving late will be locked outside the door. We must burn passionate for our Lord and be able to stay on course through the darkness, and possibly very heavy darkness. We must set our hearts and live our lives as the prepared bride of the Lord.


In John, Chapter 1, notice here the word “take” whereas most versions say “receive.”


*take: This word means to take as your betrothed, speaking of the intimate relationship Y’shua came to seal.

The version of the Bible used for this particular study, the One New Man Bible, is one of the most literal translations there is. I think in many versions, these verses lose impact going from one language to another. It shows in its commentary that Jesus did not come just to be lightly received. He came from the Father to bring us back to Him. To "take Jesus, to receive Him," means to "believe in His Name in a life changing manner." It was (and is) entering into a Covenant relationship with our Holy God. Because He called us out, He chose us. Notice it says, He gave them authority to become children of God, not just to become children of God.
NEXT
RETURN TO INDEX