AS IN THE DAYS OF NOAH

Taking a closer look at what Jesus said about the days of Noah and His coming. 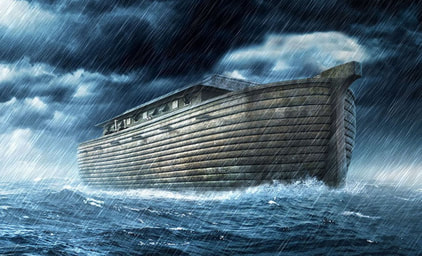 What does the Bible really mean when referencing, "as in the days of Noah?" Even if you have read these verses many times before; please slow down and read them fresh again today. What is the essence of what is being said? First let's consider Matthew and then Luke.


Is this about "the way they were living" or "the timing"?


This is a harvest. The righteous ones are taken, the unrighteous are left.


The ones who had been of the Master's house, who then chose the way of the world, will have their portion with the hypocrites and with a weeping and gnashing of teeth.

It is about timing, that no one knew the day or hour but the Father. It is about being ready, living worthy and in expectation.

Were these verses simply about how evil people were? Or are they about being right with God, because a person does not know when He is coming, and He wants us to make it?

Now the account as it is in Luke:
﻿
Jesus said that His disciples will be longing for the day but will have to wait and in the meantime, not to be fooled. And when His day does come, the whole sky will light up as lightning illuminates the sky when it happens.


In neither case here did He elaborate on how evil they were, but that life was going on: eating, drinking, planting, marrying, building etc.


Something back in Sodom had her heart. And the Lord had said not to look back. We must be faithful to the Lord. Nothing in this world is worth losing our future over.


Once again, this is a harvest. The righteous are removed and spared. And the ones left have to face the judgment and wrath of God.

Is it merely, that life will be going on as usual when “the Day” comes?

Is it, that it will “only” be “evil times” as in those days before deliverance of the righteous and judgment on the wicked?

Might it be that, no one knew the day or hour as in those days before deliverance of the righteous and judgment on the wicked?

Is it that a harvest happens- as with Noah and Lot and their families, where righteous people were saved from the judgment that came on the unrighteous and this will happen again?

We also know that Noah (and family) and Lot (and family) were remnants to say the least. They were righteous people surrounded by evil.

Peter, in the next 2 verses, said that Lot “was oppressed by the filthy conduct of the wicked (for that righteous man, dwelling among them, tormented his righteous soul from day to day by seeing and hearing their lawless deeds)."

There is no doubt that the lost people on earth will be very wicked before the rapture of the church, but Jesus did not elaborate upon it in these verses at all. He did talk about the removal of some and judgment coming upon those left. He warned to stay faithful and that those not taken would be totally taken by surprise.

ANCIENT JEWISH WEDDING CUSTOMS & JESUS CHRIST, HIS BRIDE, THE CHURCH
Some of the correlations between ancient Hebrew wedding customs and the rapture.
AS A THIEF IN THE NIGHT
Understanding this idiom, its real meaning and how it correlates with other Scripture.
CAN THE RAPTURE REALLY HAPPEN TODAY?
When all the events line up according to prophecy, the rapture will happen. So what is left that is necessary for the Word of God to be fulfilled?
CONSIDERATIONS FOR REAL REVELATION UNDERSTANDING
Help for greater revelation understanding.
﻿﻿EVERY EYE WILL SEE HIM
Jesus is coming for His bride. And He is not eloping. Every eye really will see it. The rapture will be a huge event.
EVERY KNEE WILL BOW
The Father will see His Son glorified. The lost will not only bow but they will also confess He is Lord.
IN THE TWINKLING OF AN EYE
One of the most misquoted verses of all time. Consider this message & see the true meaning of this verse.
JUDGMENT DAY & THE GREAT WHITE THRONE OF JUDGMENT
Understanding that the Judgment Seat of Christ is not the same at the Great White Throne of Judgment.
SOME KEY﻿ COMPONENTS ﻿TO THE BOOK OF REVELATION
An overview to help organize one's own thoughts.
THE APOSTASY - THE GREAT FALLING AWAY
Many people have declared that most of the world will turn to Jesus before the rapture. The Bible in 2 Thessalonians 2:3 says it will be more of the opposite that will happen.
THE BIGGER PICTURE, UNDERSTANDING GOD, THE DEVIL AND THIS DAY AND HOUR
Stop and consider the bigger picture and develop a strong stand for this day and hour.
THE LAST TRUMP
There are many trumpets in the Bible. There are 7 special ones foretold of by the apostle John; but which one happens at the rapture?
THE LAST TWO GREAT BATTLES BETWEEN GOD AND SATAN
See the biblical truth that Armageddon happens at the end of the 7 years and the battle of Gog and Magog at the end of the Millennium.
THE LORD WILL RULE WITH A ROD OF IRON
This article explains how the Lord will rule with a rod of iron.
THE OPPORTUNITY OF SALVATION DOES NOT LAST FOREVER
Once the rapture happens; it will become a time of God's wrath & all opportunity for salvation will be gone.
TWO DIFFERENT HORSES, TWO VERY DIFFERENT RIDERS, ﻿TWO DIFFERENT﻿ TIMES
The rider of the horse at the first seal is not the same rider of the white horse at Armageddon.