THE GREAT WHITE THRONE OF JUDGMENT 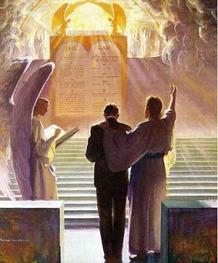 One might say by this point, "it is all over but the crying." I will show in this message that Christians will already have had their "judgment" at the judgment seat of Christ, and that the Great White Throne of Judgment (often called Judgment Day), will be the final judgment of the wicked. While this book is primarily about the rapture of the church and the last days, it also involves the judgment and demise of the wicked.

I would like to take the opportunity here, to debunk the mistaken concept, that Judgment Day is for everyone. So many Christians are brow-beaten over it and since it is part of our biblical timeline, I will show the simple truth of the matter.


Notice that it says repeatedly “the dead” and that the term - “the dead” is not how the New Testament generally refers to Christians. These are not the “dead in Christ” or those “asleep or asleep in Christ.” This day of Judgment is for “the dead” as in those who died in their sins; those not found in the Book of Life.

The Bible is clear in that there is no second death for believers.

​
Christians will already be with the Lord by the time of the Great White Throne of Judgment and we can know because the preceding verses show it to be after the Millennium and at the time of the destruction of the old heavens (physical universe) and the old earth, as the new heaven and earth are coming (Revelation 20:7-10).

This is also confirmed in:


Some might say: I have heard about the Great White Throne of Judgment all my life and that all people will be judged there. How could so many be wrong and this message be right?

Consider this simple train of thought: Would God forgive us, only to re-charge us again? Would He throw our sins into the Sea of Forgetfulness only to bring them up again? No, God never goes back on His Word.

Let's take a look at some of the verses that are key to a Christian's judgment to know the truth.


For the believers, this will be amazing. On the Day (it will be shown "when" this is, further in the article), all good works done for the right reason, will go with us and be remembered before God. They will last and receive reward. But the works that are “not eligible for reward” will burn up so to speak – and we will suffer loss. Our salvation is secure, but only the works God deems reward-able will go with us.

In other words, good works that have been done with wrongful hearts, are not eligible for reward. For example, I might have given a donation of money, food, or time to a good cause or person in need and if I did it with a right heart, it will make it to heaven. But if I did for personal gain or selfishness, pride or any number of wrongful reasons not pleasing to the Father, it will be disqualified for reward.

Our works are what will be judged. Sins that are repented from and washed away by the blood of Jesus will remain washed away. Once again, God will not be dredging up forgiven sins. We ourselves can forfeit our salvation by forsaking the Lord or some sin unto death like “not forgiving others” - where upon we will have rejected the covering of our sins by Jesus Christ and be judged with the lost and sentenced to the final hell.


This confirms the verses in 1 Corinthians 3, posted earlier. When Paul writes "whether good or bad" - he is referencing a certain kind of judgment. It is the judgment of eligible or ineligible works. The ineligible works will burn up. Eligible works that pass will be rewarded; this is the kind of judgment for believers. At the judgment seat of Christ, saved people will stay saved and our "good works" will be either rewarded or counted ineligible depending on how the Lord judges them. When a Christian's sins are gone, they are gone. There is no judgment for something that is not there.

At the final judgment of the lost, they will stand before God and their full account will be required of them because they rejected God and His pardon. All sin and works will be revealed. They will go from there to their eternal separation from God, eternal punishment (Romans 6:23, Matthew 25:46).

It may very well be that, since by the measure of our hearts, that we as Christians give, is the measure that are we receive is part of the rewarding; the same principal may also be in effect in the punishment realm. It would seem possible that for those that will be going to eternal doom, some will face a worse measure of punishment according to the measure of their hearts. Who knows how to judge us but God? For certain, He is fair and just.

Next, another section of Scripture to consider. Notice Paul is writing to Christians in these sections of scripture, not the lost.


So when is this "judgment seat of Christ"?

It is often overlooked, but when Jesus Christ comes at the rapture, He will be bringing His throne with Him. The Bible also says He is coming with clouds and a heavenly host and at the right hand of the Father. It is a completely different time then at Armageddon, whereupon Jesus comes on a white horse and with a heavenly army also on white horses.

Here are some other verses which confirm the Lord at the rapture being seated, enthroned. Don't forget, it is also when He separates His sheep from the goats (Matthew 25:31-40).


God will not be "re-separating His children out from the lost" - at the Great White Throne of Judgment when He already separated His people out at the rapture.

Notice in these next two sections of Scripture how they are about reward for what is truly worthy, not the kind of judgment of sin and condemnation.


For Christians, the reward of the Lord begins at the rapture. Only the “eligible good works” will go with us. The Bible does not say anywhere that there will be punishment for believer's shortcomings or bad choices. The Bible clearly says we will suffer loss for ineligible works, which won't be rewarded. The Bible never says, God will bring up the forgiven sin of Christians and punish them.

For the lost, the rapture marks the beginning of Judgment for the those who rejected God and are alive at the time. After the rapture, God's wrath will be poured out on all who are left on earth and will conclude at the Battle of Armageddon. When the battle is over, any of the wicked that would still be alive will be killed (Revelation 19: 21). Thus joining the dead in hell who await the Great White Throne of Judgment.

Once the rapture happens and Christians are secure in heaven there will be no future condemnation for the Lord's saints. Some time soon, this age will end and the Millennium will come and go too. And finally this old earth and universe will burn away, the Great White Throne of Judgment will happen and all evil will be cast into the lake of fire. And praise God, there will be a new heaven and new earth with the Holy City that God has prepared for His children. What a glorious day it will be.

In closing, if our sins are forgiven, they are forgiven. That means God does not count them against us.

If we have works that may be worthy of reward, it will manifest. His reward is with Him. What is important, is to keep a clean heart. To do good for the right reasons. Not just for reward, but to be pleasing to the Father. Pride is not the right reason for doing good. Personal gain is not the right reason either. The Lord loves a pure heart. This is something that we as Christians, all need to always be aware of. To be like Jesus. To love like Jesus. Many good deeds will be counted ineligible by the fire of the Holy Spirit. Let's be pleasing to our Lord, even if there would never be any reward.