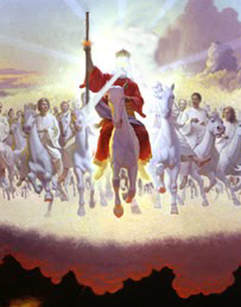 Here are the verses of reference for this particular situation in this article:

In ancient times, rods were used for discipline, chastisement and wrath as it can be seen in various places throughout the Bible.

In the book of Exodus, we repeatedly see how the Lord chose for Moses and Aaron to use a rod against the Pharaoh to bring the destructive plagues upon Egypt. He also used it to part the Red Sea for His people (Exodus 4:2,17,8:16,9:23,10:13, etc). Moses smote the rock and brought water from it for the people but that is another thought for another day; his disobedience in not “telling the rock to give forth the water” as the Lord has told him to do and smiting it instead, cost him dearly (Numbers 20:8-12).

Some want to say that the Lord will rule the earth with a rod of iron for 1000 years. I personally disagree. The 1000 year-period, commonly called the Millennium will be like no other time on earth before. But the Lord will not have to be cruel or harsh. His laws will be the law and anyone breaking His peace will in no doubt pay a price for it but it is obvious that with the devil bound for this 1000 year-period, that sin will not be rampant and common as we know life with it in the world we live in now. The lion will lay down with the lamb as well as the wolf. It will be not be like anything we have ever known.