CAN THE RAPTURE REALLY HAPPEN TODAY?

Are all the prophecies complete, that must be fulfilled first? 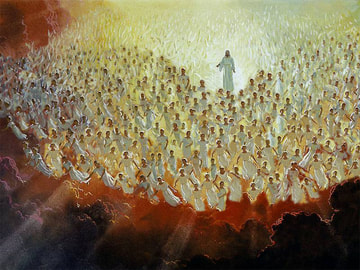 Can the rapture happen at any time? The fact is that the rapture can and will only happen in the perfect timing of God and His order. His timing is impeccable. In Creation, there was no other order that it could have been done. In the birth of our Savior, it was the perfect time in history. All prophecies that have been fulfilled so far, came together in perfection. And all prophecies yet to be fulfilled, will come also together in perfection, including the rapture.

This is just a partial list, but here are a few things to consider.

1. THE GOSPEL MUST BE SHARED GLOBALLY.


Three very important requirements are found in this next section of Scripture. Please read these verses first and two important points will follow:


2. THERE MUST BE AN APOSTASY.

A time where there is a "falling away" must come first, a mass deflection from the truth, as shown above in 2 Thessalonians 2:3. This is also spoken of in the book of Matthew.


3. THE ANTICHRIST MUST ARISE AND BE IN POWER FOR 42 MONTHS.

The man of sin, son of perdition; must be revealed and he will be in power until he exalts himself to the highest point against God and in the temple of God (2 Thessalonians 2:3-4). The Antichrist will be in power for 3 ½ years over the whole earth, even over Christians.


4. A TEMPLE OF GOD MUST BE BUILT IN JERUSALEM.

The Antichrist must have the temple of God to blaspheme in and have his false prophet set up his image there, fulfilling that the abomination of desolation will have a place in the future temple to be set-up in.


5. THE ABOMINATION OF DESOLATION MUST BE SET UP IN THE TEMPLE.

8. TIMES OF THE GENTILES MUST BE FULFILLED.


9. ALL 7 SEALS MUST BE ACCOMPLISHED.

This is because the first five seals leap up to the rapture and the 6th and 7th seals are the rapture!


For now, as of the time of this posting, all these events still need to be fulfilled before the rapture can happen. But one by one, they will be fulfilled, and one day, Jesus will come for His children!​

ANCIENT JEWISH WEDDING CUSTOMS & JESUS CHRIST, HIS BRIDE, THE CHURCH
Some of the correlations between ancient Hebrew wedding customs and the rapture.
AS A THIEF IN THE NIGHT
Understanding this idiom, its real meaning and how it correlates with other Scripture.
AS IN THE DAYS OF NOAH
Taking a deeper look at what Jesus said in this verse.
CONSIDERATIONS FOR REAL REVELATION UNDERSTANDING
Help for greater revelation understanding.
CORRELATING ESCHATOLOGICAL OLD AND NEW TESTAMENT VERSES
This incredible timeline shows 700 Bible prophecy verses, correlating Old and New Testament eschatological Scripture, describing the Day of The Lord, God’s hidden plan. Sixteen hundred years of prophecy are made clear on 12 pages.
EVEN SO COME LORD JESUS
Taking a close look at what Revelation 22:20 really means.
﻿﻿EVERY EYE WILL SEE HIM
Jesus is coming for His bride. And He is not eloping. Every eye really will see it. The rapture will be a huge event.
EVERY KNEE WILL BOW
The Father will see His Son glorified. The lost will not only bow but they will also confess He is Lord.
IN THE TWINKLING OF AN EYE
One of the most misquoted verses of all time. Consider this message & see the true meaning of this verse.
JUDGMENT DAY & THE GREAT WHITE THRONE OF JUDGMENT
Understanding that the Judgment Seat of Christ is not the same at the Great White Throne of Judgment.
SOME KEY﻿ COMPONENTS ﻿TO THE BOOK OF REVELATION
An overview to help organize one's own thoughts.
THE APOSTASY - THE GREAT FALLING AWAY
Many people have declared that most of the world will turn to Jesus before the rapture. The Bible in 2 Thessalonians 2:3 says it will be more of the opposite that will happen.
THE BIGGER PICTURE, UNDERSTANDING GOD, THE DEVIL AND THIS DAY AND HOUR
Stop and consider the bigger picture and develop a strong stand for this day and hour.
THE LAST TRUMP
There are many trumpets in the Bible. There are 7 special ones foretold of by the apostle John; but which one happens at the rapture?
THE LAST TWO GREAT BATTLES BETWEEN GOD AND SATAN
See the biblical truth that Armageddon happens at the end of the 7 years and the battle of Gog and Magog at the end of the Millennium.
THE LORD WILL RULE WITH A ROD OF IRON
This article explains how the Lord will rule with a rod of iron.
THE OPPORTUNITY OF SALVATION DOES NOT LAST FOREVER
Once the rapture happens; it will become a time of God's wrath & all opportunity for salvation will be gone.
THE PURIFIED BRIDE OF CHRIST
The church of the last days will leave the earth having gone through a period of tribulation, whether it fits some men's views or not.
TWO DIFFERENT HORSES, TWO VERY DIFFERENT RIDERS, ﻿TWO DIFFERENT﻿ TIMES
The rider of the horse at the first seal is not the same rider of the white horse at Armageddon.