THE MARRIAGE BANQUET OF THE LAMB

When the world shakes and goes dark from the sun, moon and stars failing and the atmosphere rolls back like a scroll and Jesus calls the church up to Himself, those raptured up will not just be going to heaven (Matthew 24:29-31, Luke 21:25-28). There is a special celebration event planned called the Marriage Banquet (or Marriage Supper) of the Lamb and it will be glorious.

In the study of ancient Jewish wedding customs, we find many similarities to the coming of Jesus Christ for His bride, the church. From the selection of each individual unto salvation by the Lord (becoming a part of His Church) to someday attending the Marriage Banquet of the Lamb, the body of Christ, His church is very much like a bride.

Here are some of the ancient Jewish wedding customs that are similar to relationship between the Lord and His church, the bride:


There are many other details and aspects about ancient Jewish weddings; not all are type and shadow of the relationship of Christ and His bride, the church. But certainly much of what is listed above seems to have a strong resemblance. For more information on this subject, see the article “Ancient Jewish Wedding Customs and Jesus Christ, His Bride, the Church.”

Let's look at some of the Scripture's that refer or allude to the church or God's people as a bride or the bride of Christ.


Additionally, in each of the entire books of Ruth, Esther, Song of Solomon and Hosea are founds types and shadows of betrothal, failure of betrothal, redemption with tremendous symbolism of the love and mercy of God in the sense of marital relationship.

Even in the sense that Adam and Eve were the first parents in the natural, Jesus is the “second Adam" (1 Corinthians 15:45-49). And the church is like unto His wife, which through her, He is given more children who then become more family.

With the understanding that the body of Christ is His bride, let's take a look at the verses about the Marriage Supper of the Lamb, with the preceding and following verses for a deeper understanding.

Please keep in mind, that chapter and verse markers were added to the Bible. At the close of chapter 18 of the book of Revelation, is the destruction of “great city of Babylon” and how the people of earth reacted to her demise and information as to what went on there. As chapter 19 opens, we see the reaction to “the destruction of the harlot” in heaven.


Then the sound of a huge multitude (like the sound of many waters – waters represents people) would certainly seem to be the redeemed of the earth who will have arrived from the rapture and is confirmed with the verses that follow.


The bride will have made it safely there. This is the church! And because of her faithfulness (righteous acts) to the Lord, she will be “arrayed in fine linen, clean and bright.”

In the timeline of future events, it would seem that by the placement of verses in conjunction with other Scripture, that when the rapture happens and the saints (born-again believers) arrive in heaven, it will be a glorious event! And not long after their arrival, will be the Marriage Supper of the Lamb. It is quite possible, that the harlot, Babylon, the great city of the wicked, is destroyed right after the 144,000 Jews, 12,000 from each tribe are safely out of there and sealed for the last 3 ½ years (Revelation 18:4, Revelation 7:1-3, Matthew 24:15-21).

The trumpets and bowls of God's judgment and wrath are reserved for the wicked left after the rapture. For those that would believe that the rapture happens at the last trump of the seven, please see the article called, The Last Trump. It is our belief that the last trumpet of this Age that calls the saints up, is not the same as "last one" of the seven. Not all the trumpets in the Bible are the same.

When the rapture is complete and the 144,000 Jews are securely sealed, it would seem that soon thereafter will be the demise of Babylon's great harlot city. In the following verses, we see that the Lord puts its destruction in the hearts of the wicked to fulfill His plans.


The saints will arrive in heaven full of overwhelming joy, giving God glory and there will be a time of huge praise and celebration.

Also, with Scripture and logic, we can see that the Battle of Armageddon will precede the Second Coming of the Lord with His saints when He returns to set up a special Kingdom on this earth for a special Millennium. This final Millennium will be the last one for the current earth, and after the time of testing, which will follow its conclusion, the old heavens (universe) and earth will be destroyed. There will also be the judgment of the wicked at the Great White Throne of Judgment and finally a new heaven and earth with the Holy City that Jesus has prepared for us, will come down from the heaven of God, onto the new earth (Revelation 21:1-3).

The Marriage Banquet of the Lamb is not just a banquet. It is the heavenly equivalent to a Jewish wedding banquet. The Lord made it clear when He left, that He was going to prepare a place for us and return to get us some day so that we could live with Him there.


One day, we will share the wine with Jesus at His banquet table in the Kingdom of God in heaven! We will all share it “together with Him” at the Marriage Banquet of the Lamb! One day, Jesus, the Lamb of God, will have the fruit of His labors come into fruition. Because of His great love, we are actually His reward. “We” are what He gave it all for! And as John was told to write:

Blessed are those who are called to the Marriage Supper of the Lamb!
Revelation 19:9b 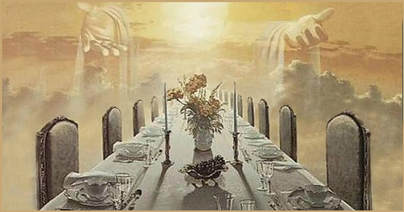 "BASIC RAPTURE" ARTICLES
WHAT IS THE RAPTURE?
Understanding the concept of biblical rapture.
IS THE WORD "RAPTURE" IN THE BIBLE?
Understanding "harpázō" - the word "rapture" comes from & where it's seen in the Bible.
MYSTERY OF THE SEVENTY WEEKS OF YEARS
A prophecy in Daniel foretold the coming of Christ & also the concept of the "last week of years" is derived; sometimes called "the 7 year tribulation."
RAPTURE VIEWS﻿﻿
Understanding pre, mid & post tribulation, millennial views, preterism & more.
THE BEST BIBLICAL MINDSET FOR LIVING IN THE LAST DAYS
As shown in 1 and 2 Thessalonians.
THE TRIBULATION & THE WRATH OF GOD
Understanding what really happens during the last 7 years of this age.
TRIBULATION & WRATH, BIBLICAL DEFINITIONS & USAGE
A study taking a deeper look at original context.

E. Cockrell, © 2018, May be copied for personal study or instruction but shall not be copied and/or distributed in whole or part without permission or for financial profit.