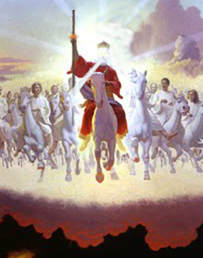 Here are the verses of reference for this particular use of the Lord of this article:


In ancient times, rods were used for discipline, chastisement and wrath as it can be seen in various places throughout the Bible.

In the book of Exodus, we repeatedly see how the Lord chose for Moses and Aaron to use a rod against the Pharaoh to bring the destructive plagues upon Egypt. He also used it to part the Red Sea for His people (Exodus 4:2,17,8:16,9:23,10:13, etc).

Some want to say that the Lord will rule the earth with a rod of iron for 1000 years. I personally disagree. The 1000 year-period, commonly called the Millennium will be like no other time on earth before. But the Lord will not have to be cruel or harsh. His laws will be the law and anyone breaking His peace will in no doubt pay a price for it but it is obvious that with the devil bound for this 1000 year-period, that sin will not be rampant and common as we know life in the world we live in now. The lion will lay down with the lamb as well as the wolf. It will be not be like anything we have ever known.

ANCIENT JEWISH WEDDING CUSTOMS & JESUS CHRIST, HIS BRIDE, THE CHURCH
Some of the correlations between ancient Hebrew wedding customs and the rapture.
AS A THIEF IN THE NIGHT
Understanding this idiom, its real meaning and how it correlates with other Scripture.
AS IN THE DAYS OF NOAH
Taking a deeper look at what Jesus said in this verse.
CAN THE RAPTURE REALLY HAPPEN TODAY?
When all the events line up according to prophecy, the rapture will happen. So what is left that is necessary for the Word of God to be fulfilled?
CONSIDERATIONS FOR REAL REVELATION UNDERSTANDING
Help for greater revelation understanding.
CORRELATING ESCHATOLOGICAL OLD AND NEW TESTAMENT VERSES
An incredible timeline showing 700 Bible prophecy verses, correlating Old and New Testament eschatological Scripture.
﻿﻿EVERY EYE WILL SEE HIM
Jesus is coming for His bride. And He is not eloping. Every eye really will see it. The rapture will be a huge event.
EVERY KNEE WILL BOW
The Father will see His Son glorified. The lost will not only bow but they will also confess He is Lord.
IN THE TWINKLING OF AN EYE
One of the most misquoted verses of all time. Consider this message & see the true meaning of this verse.
JUDGMENT DAY & THE GREAT WHITE THRONE OF JUDGMENT
Understanding that the Judgment Seat of Christ is not the same at the Great White Throne of Judgment.
SOME KEY﻿ COMPONENTS ﻿TO THE BOOK OF REVELATION
An overview to help organize one's own thoughts.
THE APOSTASY - THE GREAT FALLING AWAY
Many people have declared that most of the world will turn to Jesus before the rapture. The Bible in 2 Thessalonians 2:3 says it will be more of the opposite that will happen.
THE BIGGER PICTURE, UNDERSTANDING GOD, THE DEVIL AND THIS DAY AND HOUR
Stop and consider the bigger picture and develop a strong stand for this day and hour.
THE LAST TRUMP
There are many trumpets in the Bible. There are 7 special ones foretold of by the apostle John; but which one happens at the rapture?
THE LAST TWO GREAT BATTLES BETWEEN GOD AND SATAN
See the biblical truth that Armageddon happens at the end of the 7 years and the battle of Gog and Magog at the end of the Millennium.
THE OPPORTUNITY OF SALVATION DOES NOT LAST FOREVER
Once the rapture happens; it will become a time of God's wrath & all opportunity for salvation will be gone.
TWO DIFFERENT HORSES, TWO VERY DIFFERENT RIDERS, ﻿TWO DIFFERENT﻿ TIMES
The rider of the horse at the first seal is not the same rider of the white horse at Armageddon.

Copyright 2017 E. Cockrell May be copied for personal study or instruction but shall not be copied and/or distributed in whole or part without permission or for financial profit.