THE SEVEN TRUMPETS & THE THREE WOES 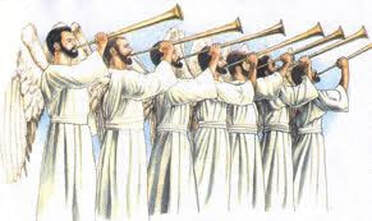 These 7 angels with their trumpets, will initiate from the golden altar in heaven, which is where the "incense and prayers of the saints" come before the throne of God. John saw as the angel took the censer, filled it with the fire of the altar and then threw it to the earth, resulting in noises, thunderings, lightnings and an earthquake.


The 1st trumpet will sound, and hail and fire mingled with blood will be thrown to the earth, resulting in 1/3rd of the earth’s trees and all green grass being burned up.


The 2nd trumpet will sound, and something like a great burning mountain will be thrown into the sea, resulting in 1/3rd of the seas becoming blood, causing the death of 1/3rd of the living creatures in the seas and 1/3rd of all ships will be destroyed.


The 3rd trumpet will sound, and a great fiery star from heaven, called Wormwood, will fall on 1/3rd of the rivers and waters, that will become wormwood and bitter, causing many to die from it.


The 4th trumpet will sound, and darkness will strike 1/3rd of all heavenly light (sun, moon and stars) effecting the earth, resulting in 1/3rd loss of day and night light.

THE LAST 3 TRUMPETS ARE ALSO THE 3 WOES

Trumpet 5 / Woe 1 / Revelation 9:1-12 Then the fifth angel sounded: And I saw a star fallen from heaven to the earth. To him was given the key to the bottomless pit. And he opened the bottomless pit, and smoke arose out of the pit like the smoke of a great furnace. So the sun and the air were darkened because of the smoke of the pit. Then out of the smoke locusts came upon the earth. And to them was given power, as the scorpions of the earth have power. They were commanded not to harm the grass of the earth, or any green thing, or any tree, but only those men who do not have the seal of God on their foreheads. [The 144,000 Jews are on earth but sealed by God] And they were not given authority to kill them, but to torment them for five months. Their torment was like the torment of a scorpion when it strikes a man. In those days men will seek death and will not find it; they will desire to die, and death will flee from them. The shape of the locusts was like horses prepared for battle. On their heads were crowns of something like gold, and their faces were like the faces of men. They had hair like women's hair, and their teeth were like lions' teeth. And they had breastplates like breastplates of iron, and the sound of their wings was like the sound of chariots with many horses running into battle. They had tails like scorpions, and there were stings in their tails. Their power was to hurt men five months. And they had as king over them the angel of the bottomless pit, whose name in Hebrew is Abaddon, but in Greek he has the name Apollyon. One woe is past. Behold, still two more woes are coming after these things."

The 5th trumpet will sound, and a fallen star from heaven to earth will be given the key to the bottomless pit (not the final lake of fire but the bottomless pit, sometimes called the abyss), and evil locusts will be let loose. They will torment by stinging people for 5 months and the people will want to die, but not be able to. The the fifth trumpet is the first woe.

Trumpet 6 / Woe 2 / Revelation 9:13-21 Then the sixth angel sounded: And I heard a voice from the four horns of the golden altar which is before God, saying to the sixth angel who had the trumpet, "Release the four angels who are bound at the great river Euphrates." So the four angels, who had been prepared for the hour and day and month and year, were released to kill a third of mankind. Now the number of the army of the horsemen was two hundred million; I heard the number of them. And thus I saw the horses in the vision: those who sat on them had breastplates of fiery red, hyacinth blue, and sulfur yellow; and the heads of the horses were like the heads of lions; and out of their mouths came fire, smoke, and brimstone. By these three plagues a third of mankind was killed--by the fire and the smoke and the brimstone which came out of their mouths. For their power is in their mouth and in their tails; for their tails are like serpents, having heads; and with them they do harm. But the rest of mankind, who were not killed by these plagues, did not repent of the works of their hands, that they should not worship demons, and idols of gold, silver, brass, stone, and wood, which can neither see nor hear nor walk. And they did not repent of their murders or their sorceries or their sexual immorality or their thefts.

A holy interruption begins now at Revelation 9:21 and ends at Revelation 11:14. When the 6th trumpet sounds, "4 special angels" will be released, who will have been previously "bound" at the Euphrates River, and they will kill 1/3rd of mankind. They will use an army of 200 million who will emit 3 kinds of plagues; fire, smoke and brimstone, from their front and back ends. And the surviving 2/3rds of mankind will still not repent. The 6th trumpet is the 2nd woe.

Trumpet 7 / Woe 3 / Revelation 11:15-19 Then the seventh angel sounded: And there were loud voices in heaven, saying, "The kingdoms of this world have become the kingdoms of our Lord and of His Christ, and He shall reign forever and ever!" And the twenty-four elders who sat before God on their thrones fell on their faces and worshiped God, saying: "We give You thanks, O Lord God Almighty, the One who is and who was and who is to come, because You have taken Your great power and reigned. The nations were angry, and Your wrath has come, and the time of the dead, that they should be judged, and that You should reward Your servants the prophets and the saints, and those who fear Your name, small and great, and should destroy those who destroy the earth." Then the temple of God was opened in heaven, and the ark of His covenant was seen in His temple. And there were lightnings, noises, thunderings, an earthquake, and great hail.

In Revelation, chapter 10, when John was visited by an angel with a scroll (that John ate), this angel had something to say about the 7th trumpet.


And completion is coming. It is also shown in the next verses.


The destruction of the old earth and its heaven (universe), and the Great White Throne of Judgment will be the final judgment of the wicked and is when the 7th trumpet will sound, and the mystery of God will be finished. The reward of the prophets and the saints and those who fear the Lord, is the end of evil and a beautiful future with a new heaven and earth (Revelation 20, 21 and 22).

The first 6 of the 7 trumpets will happen in the last half of the 7 years but the 7th trumpet is reserved for the Great White Throne of Judgment. When the 7th trumpet blows, all will be finished and a holy and joyful eternity will await the saints and all evil will be cast into the great lake of fire forever. (first 3 ½ years = 7 seals // the last 3 ½ years = 6 trumpets and 6 bowls. The 7th trumpet will be after the 7 years and the Millennium at the Great White Throne of Judgment).

In closing, here is a chart that according to this viewpoint, shows how most likely the seals, trumpets and bowls will happen.

​While it seems that the trumpets start just after the rapture, the bowls could follow or interact. For sure, both follow the rapture and are the judgment and wrath of God.​

THE HOLY INTERRUPTION
The interruption John had writing the 7 Trumpets.

OTHER ARTICLES ABOUT "THE SEVENS" OF REVELATION

BIBLE VERSES OF ALL THE SEVENS OF THE BOOK OF REVELATION
Have you ever wondered just how many sevens are in book of Revelation? They are listed here.
THE SEVEN BOWLS OF THE WRATH OF GOD
The 7 bowls of God's wrath with light commentary.
THE SEVEN SEALS OF REVELATION
Showing the 7 Seals with commentary, a chart & how they correlate with other Scripture.
THE SEVEN TRUMPETS AND SEVEN BOWLS PARALLEL STUDY
Side by side, for study & personal analysis.