EVERY EYE WILL SEE HIM

"And you will see the Son of Man sitting at the right hand of the Power, and coming with the clouds of heaven."
Matthew 26:64 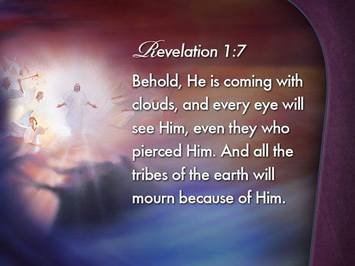 When Jesus comes and the skies roll up like a scroll, every eye will see Him. The common idea that the rapture will be “invisible” is bad theology. The rapture will be so visible, that even the “one's who pierced the Lord and murdered Him, will see Him coming on the clouds in great glory,” right from their place in hell (Revelation 1:7). How can the powers of heaven be shaken, the sun go black and the moon turn blood-red as Jesus foretold in Luke 21:25-28 and no one know but, the Christians, that the rapture is going on? And why would God want to be secretive?

This article will show that the rapture will be a time of deliverance for Christians, a time of the harvest for God and a time of judgment for the wicked. It is the end of the age of salvation and the beginning of God's wrath on the most wicked generation that ever lived.


Jesus told the evil priest and his cohorts, in essence, that they will see Him at the rapture. In that great Day, He will have His Father with Him because what Jesus is saying  is that He will be “seated in the place of power at God’s right hand.” And He will be coming with the “clouds of heaven” which represent Christians (in spirit that have preceded those living to be with the Lord in heaven), heavenly angels & the glory of the Lord Himself (see the next section of verses and more later).


This is the rapture - some wonder, how can those who sleep in Christ come with Him and rise first also: "they" are coming in spirit form and their bodies in the graves will change from corruptible to incorruptible because there can be no corruption in heaven. Another verse that shows people in heaven coming with the Lord at the rapture, is found in 1 Thessalonians 3:13.

Jesus Christ is coming enthroned at the right hand of the Father and bringing with Him those who sleep in Jesus and every eye will see Him and His glory. "Everyone in all places" will "bless the Lord" and "give Him glory, including the wicked.


Also, every knee will bow to the Lord.


When the wicked see the rapture happening, they will be in a state of "shock and awe" as the Son of God suddenly bursts through the atmosphere. In the next verses, when John records that the “world mourns” and “gives Him glory,” it will be because the situation will demand it.

See "the visibility" of the rapture in these next sections of Scripture. First recapping our initial verse with explanation.


This verse, in Revelation 1:7, completely explains how the high priest (of Matthew 26:64 & Mark 14:62) and other evil cohorts will see Jesus coming. “All” on the earth and all below the earth, all will see Him as in Revelation 5:13 (as in the verse also previously shown above; and all the "tribes of the earth who will mourn" are certainly not the Christians being raptured- the Christians will see also, but it will naturally be joyous).


The rapture is when the Lord calls out His harvest, His people who are Christians. The wicked will mourn and grieve for the trouble that will be upon them, for these wicked ones will have rejected and blasphemed the Lord Jesus Christ, His Gospel, rejoiced and celebrated the killing of His Two Witnesses as well as persecuted the true followers of the Lord, Christians. Not to mention, they will have chosen the Antichrist, worshiped his image and have taken his mark.

The following verses are not only representative of the Two Witnesses being raised from the dead and called up to heaven, but Christians will rise also. This is part of the rapture. And the evil ones will see it all.


When do the lost ever give glory to the God of heaven?

When they have blasphemed the real God and accepted a global leader who blasphemed the real God and set himself up as god himself. They will give glory to the God of heaven, by fear because they will bow their knees and confess with their mouths... because they will honor Jesus Christ as Lord, to the glory of God the Father according to Philippians 2:9-11.

Jesus Christ will be glorified by all. All beings (human and angelic) of the Kingdom of heaven will glorify the Lord joyously and all the wicked ones (both human and demonic) will have no choice but to fear and also give Him glory.

This is also the beginning of judgment on the wicked. Look at this following verse and see it being fulfilled.


When “all Christians” are with the Lord, together above the earth joyously glorifying the Lord and the wicked are forced to “see and bow before the Lord” and “give Him glory,” will this not be the fulfillment of Revelation 3:9? Certain wicked Jews (and all the followers of Satan) who believed in their false Messiah and mocked and persecuted God's true people, will be left on earth and "see" the very people they will have persecuted and some even killed, standing with the Lord in the air and while bowing to the Father and Lord Jesus and giving the Lord glory.

Next, verses will be presented that show it to be impossible to be a secret, invisible rapture as put forth by the Left Behind series and taught by many famous people. God's Word is true, no matter how much myth and bad theology has been accepted.

And Jesus said a lot about it. Every eye will see and experience the whole event.


How could “the sun go dark and the moon not give its light, and stars fall from heaven” and "the powers of the heavens be shaken," and no one see or notice? How could the whole earth go dark and no one notice or be able to see or tell what is going on?

The Lord said He will be seen both by those who will fear and by those who are about to be redeemed. The Lord never said "only Christians" will see Him.


“They who will fear” are the wicked and the ones Jesus wants to “lift up your heads” are the Christians about to be redeemed. If Christians were not here, why then would Jesus say "look up and lift up your heads, because your redemption draws near."? This shows that it is not at the Armageddon which comes at the end of the seven years. Christians will already be with the Lord by then.

Next please consider, what does the Lord mean by “the sign of the Son of Man appearing in heaven?”


"The sign of His coming” is that "the dimension" we now live in, including our entire atmosphere and all its light, will “cease as we know it” - as this “all-encompassing event” takes over the whole earthly scene. The world as we now know it will go 100% completely dark (sun, moon and stars) and our atmosphere above “roll up like a scroll” - this is huge. This is the sign of the Son of man coming!

And while the “whole world” will have become completely dark and our atmosphere have collapsed like a scroll rolling up, then the entire earth will be illuminated by the glory of the Son and His Father (who He is seated next to in Power), surrounded by their glory and the Christians from heaven and the angels coming through. All the earth will come to a stand still and come to “Attention.” Every living thing will pay attention to what is going on, whether “above, on or below the earth” or “even in the sea.” It will be an “all-encompassing event.”


Once the saints are returned to heaven, along with those who had been raptured and all with the new incorruptible bodies, the results of judgment will follow with the seven trumpets and seven bowls of wrath on all who had rejected the Lord and gone the way of the Antichrist and mystery Babylon.

See the Lord in His brightness and glory coming suddenly, in these next verses.


The lost will see and fear.


The wicked will try to hide, because they will see Him. This not about Armageddon when Jesus will come riding on a horse or even the Great White Throne of Judgment; this is the rapture when He comes with the clouds of saints and a throne and great glory. This is “judgment time” for the lost, having been blasphemous and utterly wicked; for utterly rejecting the real God and the Gospel. For taking the mark and worshiping the beast. Oh yes, it is "not just the rapture" but the rapture and much more.

Many people seem to overlook this next verse about this Day of the Lord, at the rapture. Please read and consider.


Jesus will not separate (or re-separate) “the sheep out” at the Great White Throne of Judgment. That day will be the “final day in court” for the people in Hell. He will not do that at Armageddon. The Lord separates out His sheep at the rapture. The Lord will pull out His sheep and the goats will be left.

It will be very important at this time to call out and seal the 144,000 Jewish remnant for protection. Then, for 3 ½ years, “judgment & wrath” in the form of the 7 trumpets of judgment will begin to happen and the 7 bowls of the wrath of God will fall on the wicked and will climax with the Battle of Armageddon and “the crushing of the grapes of wrath” (Revelation 14:17-20,19:11-21).


So we can see that when the rapture happens, all people and all beings will “give Him glory.” On and under the earth and in heaven. We can see that the 144,000 must be sealed to protect them from the harm that is coming upon mankind and the earth during the next 3 ½ years.

Here are some additional verses for consideration, just to emphasize more of how “every eye will see Him.”


This is speaking of the rapture, which you can read more about in the preceding verses at your convenience.

The following verses not only speak of Jesus “being revealed” but also of the judgment to come and why it will be coming.

Two more verses about the Lord being revealed.


This could be no other time than the Day of the rapture. More proof? By the time of the Great White Throne of Judgment, His glory will already have been revealed. It will be glorious when we see Jesus. It will be like ice water (or maybe more like hot water) when the wicked will see Jesus. But one thing is for sure; we will all see Him together.