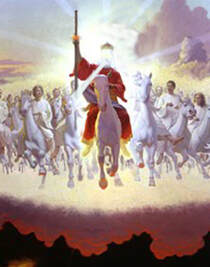 Here are the verses of reference for this particular use of the Lord of this article:

In ancient times, rods were used for discipline, chastisement and wrath as it can be seen in various places throughout the Bible.

In the book of Exodus, we repeatedly see how the Lord chose for Moses and Aaron to use a rod against the Pharaoh to bring the destructive plagues upon Egypt. He also used it to part the Red Sea for His people (Exodus 4:2,17,8:16,9:23,10:13, etc).

Some want to say that the Lord will rule the earth with a rod of iron for 1000 years. I personally disagree. The 1000 year-period, commonly called the Millennium will be like no other time on earth before. But the Lord will not have to be cruel or harsh. His laws will be the law and anyone breaking His peace will in no doubt pay a price for it but it is obvious that with the devil bound for this 1000 year-period, that sin will not be rampant and common as we know life in the world we live in now. The lion will lay down with the lamb as well as the wolf. It will be not be like anything we have ever known.
COMPANION ARTICLE
THE BATTLE OF ARMAGEDDON
This message reveals the biblical truth about what we can know of this future battle.

JUDGMENT DAY AND THE GREAT WHITE THRONE OF JUDGMENT
This article reveals the truth about Judgment Day as the Bible shows it.
THE 144,000 JEWS OF THE BOOK OF REVELATION
This article explains what we know about the 144,000 Jews and how they fit into the end of this age and in the Millennium.
THE 144,000 JEWS OF THE BOOK OF REVELATION - BIBLE VERSES
A collection of the Bible verses about the 144,000 Jews of the book of Revelation.
THE LAST TWO GREAT BATTLES
See the biblical truth that Armageddon happens at the end of the 7 years and the battle of Gog and Magog at the end of the Millennium.
THE MARRIAGE BANQUET OF THE LAMB
The bride of Christ will join the Lamb of God in heaven for this wonderful event.
THE MILLENNIUM
Jesus Christ will return and reign over this earth for a special 1000 year period, commonly called the Millennium.
THE SECOND COMING OF JESUS CHRIST
The Lord will return to earth and set up a special 1000 year reign.There are key differences between the Second Coming and the rapture.


Copyright 2017 E. Cockrell May be copied for personal study or instruction but shall not be copied and/or distributed in whole or part without permission or for financial profit.