WHAT IS THE ABOMINATION OF DESOLATION? 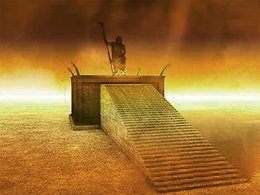 The abomination of desolation will be the image of the beast that will defile the sanctuary in the temple of Jerusalem.

Many people try to say the verses in Daniel 8:9-14, 9:27, 11:29-35, 12:8-13 that refer to the “abomination of desolation” have already been fulfilled. But the abomination of desolation is spoken in various places from Daniel to Revelation and it is impossible to have already happened. When Jesus came, He even said it was still yet to happen. Here are a few reasons why it is still yet to come and the corresponding Bible verses.

1. It must stand in “the place of offering” in the temple in Jerusalem.

2. A seven-year covenant (a treaty of some kind) will be broken halfway through its duration, the daily sacrifices and offerings will be stopped, and the abomination will be set-up in the sanctuary.

4. It is ordered to be built by the Antichrist's henchman, the false prophet.

5. The false prophet will give it breath and it will speak.

6. The order will be given that all the people of the world must worship it or be killed.


It is important to realize that anyone who will worship the image of the beast will be eternally doomed.


It is important to note the biblical definitions of abomination and desolation in Hebrew as Daniel used them. Strong's Greek & Hebrew Dictionary says the following:

Desolation: “shāmēm” a primitive root; to stun, (or intransitive grow numb), i.e. devastate or (figurative) stupefy (both usually in a passive sense): make amazed, be astonished, (be an) astonish (-ment), (be, bring into, unto, lay, lie, make) desolate (-ion, places), be destitute, destroy (self), (lay, lie, make) waste, wonder.

In a way, there will actually be two abominations in the temple. One will be the image of the Antichrist that will stand in the holy place. The second will be the person of the Antichrist, who will set himself up as God there, as we see in the following section of Scripture.


In Daniel chapter 3, there is a type and shadow of the abomination of desolation. King Nebuchadnezzar had a statue of himself built and set up in the plain of Dura in Babylon. And he called everyone together.


He had the order given to all his leaders and people to fall down and worship it at the sound of his music or be cast immediately into a burning fiery furnace.


When the order went out and his music cued the people, all the people did as commanded except for those faithful to God. Three Jews disobeyed and were exposed by ones who hated them.


Their disobedience was brought to the evil king's attention who became outraged and ordered the “ones who would not bow” to be brought before him. Even though he was angry, he offered them a second chance.


In his delusion, the king said to God's faithful ones, “And who is the god who will deliver you from my hands?" And the three faithful Hebrews replied that there was no need to even answer the evil king and that their God was more than able to deliver them from his hands and that even if their God did not, they would not serve or bow down to his gods or image. So, the evil king ordered the fire to be made 7 times hotter.


Nebuchadnezzar ordered them to be bound and cast into the fiery furnace that was so hot, that it “burned the men to death” that cast the three faithful Hebrews in.


And to the king's shock and astonishment, he saw 4 men walking about “unbound” in the midst of the fire, unharmed, and one of them looked like the Son of God.


Evil king Nebuchadnezzar then called them out of the furnace, to find that the fire was unable to touch them or their garments and not even the smell of smoke was upon them or even one hair singed.


While Nebuchadnezzar allowed God's faithful ones to live, the Antichrist's attack on those who will not bow to him and his image, will only be stopped by the return of Jesus Christ. At the rapture, Jesus will actually deliver the Christians out of the Antichrist's power and the 144,000 true and faithful Jews (12,000 from each tribe of Israel; who once they realize that they had been duped), will be sealed for the duration of the last week of years; in other words for “the last half” of “the seven years” set aside (3 ½ years).

The very word that “the rapture” is derived from is “harpázō” and it means to “seize by force; snatch up, suddenly and decisively – like someone seizing bounty (spoil, a prize); to take by an open display of force (not covertly or secretly).” And unlike much erroneous teaching, Jesus will be clearly seen as the sky rolls back like a scroll over the whole earth and the rapture takes place (see the article, Every Eye Will See Him).

In this day and age, technology has advanced tremendously and unless the earth has some kind of setback, we can only expect it to advance even more. Who knows but that the “image of the beast” - this “abomination of desolation” that will be given “breath and a voice” perhaps will be some sort of hologram, robot or even some form of android or something beyond what we can even imagine today.


Much rhetoric and myth can be dismissed by simply reading and studying the Word of God with a clear mind. It is highly suggested that when reading the Bible, to let it speak for itself. The truth will always verify itself if it is meant for us to be able to know something. Sometimes our heavenly Father says that something is “not for us to know” and when He does, it will not be known!

In closing, here are some facts. The Antichrist, who is the false Christ of the books of Daniel and Revelation, has not risen to power for his final tour of duty yet (see the message that shows how the Antichrist is revealed in three prophetic sections of Scripture). So even if the temple in Jerusalem was defiled with any acts or images before, it could not have been with the image of this future evil one, that will be part of demanding the whole world to “worship the Antichrist and the dragon” that will empower him (Revelation 13:4).

Everyone in this world needs to know that anything that comes between a person and the One True God is a mistake and grave error.


The abomination of desolation and the beast that it is an image of, will be part of a global coo to turn man against the One True God and to fall for the despicable evil one who has longed for his day. It is the tower of Babel all over again and the final rebellion of this age. There are many articles on this site that expound upon many of the thoughts here. Only truth stands upon truth, precept upon precept and much of the ideology that is heard about the rapture in the world today is erroneous, unfounded and actually put out to confuse Christians (and even the lost) who are seeking the truth. This is truly the age of deceit and deception. Read and know God's Word and hide it in your heart. Only by knowing the truth ahead of time, can we recognize the lies from outside the church and even from infiltration by the enemy and human error within the church.

ABOMINATION OF DESOLATION BIBLE VERSES
A compilation for thought & study.

ANTICHRIST & FALSE PROPHET BIBLE VERSES
A compilation for thought & study.
SATAN IS NOT THE ANTICHRIST
A distinct difference shown with Scripture.
THE ANTICHRIST, HIS IDENTITY & NAME
Understanding Revelation 17 & Daniel 7 & more.
THE ANTICHRIST IS UNIQUELY REVEALED IN THREE PROPHETIC SECTIONS OF SCRIPTURE
The visions of Daniel 7, Daniel 8 and Revelation 17 reveal the same evil One in 3 different ways and yet the same.
THE DRAGON AND THE BEASTS WITH SEVEN HEADS AND TEN HORNS
It is possible that the dragon of Revelation 12, the beasts of Revelation 13 and 17, as well as the four beasts of Daniel chapter 7, are the same in some manner.
THE SCARLET BEAST AND THE MYSTERY, BABYLON THE GREAT, THE MOTHER OF HARLOTS AND OF THE ABOMINATIONS OF THE EARTH
Scripture with commentary showing much about who the beast is and its relationship with Babylon, the harlot, as well as, who she really is.
THE SECOND BEAST, THE FALSE PROPHET
In Revelation 13, we see that there is a first beast, the Antichrist, as well as a second beast, the false prophet.
UNDERSTANDING WHO THE ANTICHRIST IS, THE SON OF PERDITION
He is both false Christ & anti Christ.
WHO IS ABLE TO MAKE WAR WITH THE ONE WHO HAD THE DEADLY WOUND AND STILL LIVES?
Taking a look at how the assassination attempt of the Antichrist will amaze the lost and how strongly they will follow him.
WILL THE CHRISTIAN'S ANTICHRIST BE THE NEW JEWISH MESSIAH?
Thoughts for consideration.

Copyright 2017 E. Cockrell May be copied for personal study or instruction but shall not be copied and/or distributed in whole or part without permission or for financial profit.